It was recently one of my good friends' birthdays. She is a Chicago gal at heart and I know her dreams of moving out of the suburb and into the city will be realized soon.

As usual I found this idea via pinterest and made my own version. I searched for skyline templates to print out and trace and found a few I liked by simply searching on Google.

But in the end I decided it would be easier for me to just draw it freehand i first drew it on a blank piece of printer paper until I got the version I liked best. Below is an image of my drawing before I cut it out. 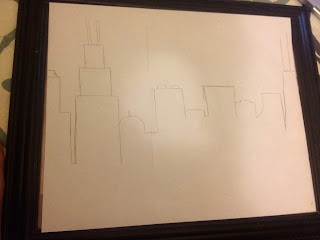 Then I taped the paint samples together. (I decided to overlap them in a way so that the name of the shade of paint was not visible). 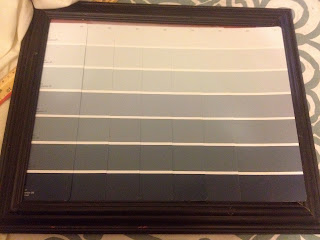 *Make sure you get enough samples to fill the frame! You can also adjust the height of the 'skyline' to wherever you want by chopping off one (or more) of the shades. From the image above you can tell that my paint samples filled the frame so I chopped off the top few shades.

I then traced out my own little template that I had drawn freehand and then cut it out.

Then simply decide what color you want the background to be and frame it! 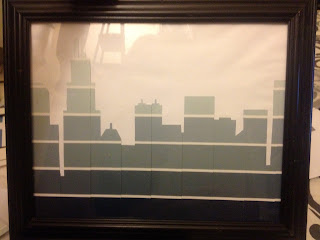 (In my finalized project I actually made the background gray but of course I forgot to take a picture before I gave it to my friend! Oooops! Maybe I'll harass her for a picture of it and update this post later).

Note: I personally dealt with a little dilemma when beginning this project and deciding whether it was right to just take so many samples.
In reality I ended up using less than I have typically taken when trying to determine colors for an actual paint project so I felt like it was somewhat more justified. If I were to do more than one of these projects I would have attempted to find a way to purchase them in bulk.